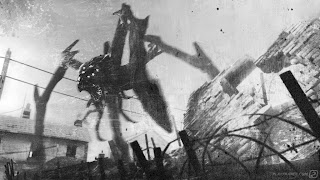 I loved it. The monster design was great. Hasbro is releasing a limited edition of it later this year so everyone will have their very own, high priced Cloverfield. You couldn't get a true money shot of it, but you did get the suggestion that this thing was big, lean and very different in it's design. The parasitic ticks that fell off of it were even nastier, probably becasue of the one-on-one interaction with the people. The actors were decent and they showed true fear and desperation. The hand-held camera was a little disorienting, but it did have it's calmer moments. If you're open to motion sickness then you should either pass on it or take some dramamine before you see it. There have been reports of people being sick during the movie. The story is a basic one, but with the camera work, action and threat from the monsters supporting it, this movie worked for me. It was very entertaining and I recommend it to everyone that's a big monster-movie fan.
Posted by dogboy443 at 6:40 AM 2 comments: 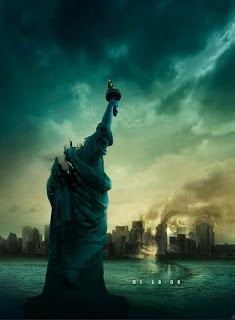 This is our movie for the weekend. Paully P and his crew are going to join me tomorrow afternoon to see if our expectations have been fulfilled. 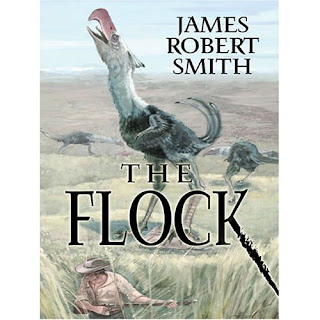 So James was talking about his book and Steve put it on his Books of 2007 so I had to buy it. I'm reading it now so I'm not prepared to write a review, heck I don't write reviews. I'll tell you why I liked a book, movie or TV show and why I didn't. So far I like it.
Stay tuned.
Posted by dogboy443 at 9:25 PM 1 comment:

Creature returns to the big screen? 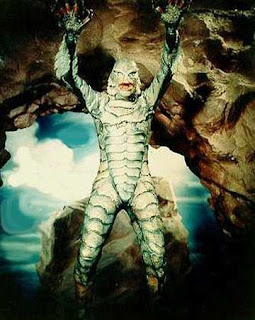 So James mentioned on the post belows comments, "whatever happened to the remake". I dug around and I found Ben Chapman's (played the land Creature) web-site and I've gleamed the following:

The Creature From the Black Lagoon remake will begin production later this year. Currently the movie is in pre-production. The movie is slated to be released some time in 2008 and is budgeted for $90 million; however, that budget is sure to change now with the news of a new co-financer. Breck Eisner is directing with Gary Ross of Larger Than Life Productions (and Tedi Safarian assisting) as the screenwriter.
A Victorian expedition group searching for fossils along the Amazon locate an area that has been kept on a tangential track of evolution alongside mankind, untouched by modern man, and filled with strange and fantastic creatures. This haven is guarded, however, by a sleek and clever gill-man: the Creature from the Black Lagoon.
So far, Universal Studios has signed Bill Paxton as an actor in the movie. If I was to make a guess, it would be to play the male lead (David Reed in the original). Brian Steele will play the Gillman.
"The story involves the members of a fossil-hunting expedition down a dark tributary of the mist-shrouded Amazon, where they enter the domain of a prehistoric, amphibious "Gill Man" — possibly the last of a species of fanged, clawed humanoids who may have evolved entirely underwater. Tranquilized, captured and brought aboard, the creature still manages to revive and escape — slaughtering several members of the team — and abducts their sole female member, spiriting her off to his mist-shrouded lair. This sparks the surviving crewmen to action — particularly those who fancy carrying the girl off themselves."
And this leak of the script: Warning- There are spoilers below...

The movie opens with an ex-research fellow named Carrie and her fiance taking a trip down the Amazon. Their boat breaks down and they are assumed dead. They are stuck in the Amazon rainforest and after spending a difficult evening in the wild, they run into a pharmaceutical research vessel named the Deadelus. This vessel is on a secret expedition in uncharted territory. They are given a lift by the team leader, Morgan, and the research institute executive named Andrew.

Their destination is a lagoon with valuable black algae laying on its floor. They soon discover a strange effect the algae has on the area. Everything around is growing at an accelerated rate and regenerates when they try to clear a path to the lagoon. Andrew discovers a tree that grows its branches back after they were removed only hours before. Morgan then stakes his claim to the area.

What would a horror movie be without a love story? A love triangle begins between Carrie, Andrew and John. In the distance, they are watched by a strange creature hiding in the foliage. The Gillman doesn't disappoint and later attacks raft dwellers, among others. In the remake, the Gillman may be a Gillwoman as she has younglings swimming with her. The creature is also much more mobile with the ability to climb trees and swing around rather than walking slowly.

Their first encounter with the Creature is when they capture one of babies. This makes the mother very angry, of course. Thus, the audience is able to root for the monster.

So it doesn't look like Guillermo Del Toro or John Carpenter are involved. Too bad. Carpenter is such a fan and GDT would have given us the gross factor, but you can at least see his homage to Creature in HellBoy 1 and soon in HellBoy 2 coming this Summer. And if you find yourself in mind for some creature, check out the Monster Club. At least we get a decent Gill Man design in that movie.

Happy Swimming
Posted by dogboy443 at 4:39 PM No comments: 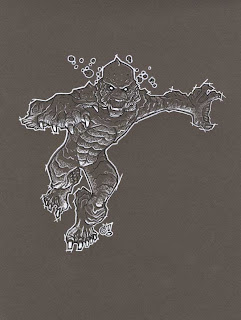 For an personal wedding gift, I bought this piece from Craig Rousseau of Perhapanauts fame. Beautiful pencil and tone work on Canson paper. Check out his site under my Where in the World section and look through his Canson pieces. Gorgeous stuff.
Posted by dogboy443 at 10:22 PM 1 comment: 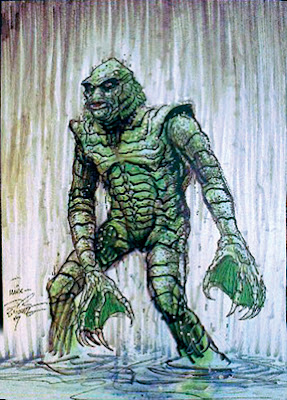 So it's been 18 years this wonderful piece of artwork has been hanging on my wall and I finally found an old scan I had of it. Call me lazy but I really don't want to take the whole frame apart and re-scan it so you're stuck with this...or until Steve Bissette kindly asks me for a real good scan. Then I'll carefully take it apart. So the history on this was that I asked Steve for a nice commission piece of the Creature from the Black Lagoon, one of my all-time favorite monsters and also one of Steve's. Well it took a few months and and I cornered Steve at a convention and he had it with him. For $50 I was expecting a nice B&W or greywash piece. What I got was this amazing color piece done in markers, color dyes and silver marker. Stunning and I think my jaw hit the ground when I walked away with it.
A great story to go along with an amazing piece.
Posted by dogboy443 at 8:29 PM 1 comment: