All In The Un-Dead Family 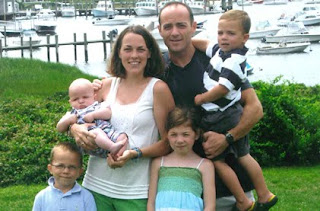 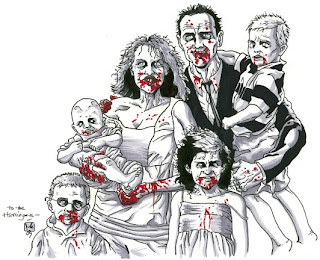 To my surprise our next door neighbor wanted their family zombie-fied for Christmas. The husband is a movie fiend like me and he loved my cover to James Robert Smith's zombie novel The Living End. They provided me a few good shots of the family and I went to town on it. Baby Liam is creepy!

Jobs Lost Due to Ending of Greyhound Racing in Massachusetts 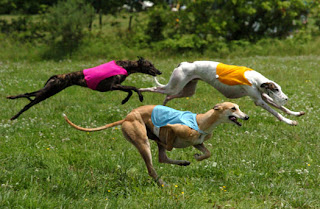 This is what I've been reading all morning. My boss even sent me a link to Boston.com about this. Jobs were lost because the factual word didn't get out strong enough. Massachusetts had some of the most cleanest and regulated tracks in the USA. Greys were seen by a vet before, after and in-between races to assure their health was up to standards. Now that the citizens of Massachusetts have voted to have Grey racing Not-In-My-Back-Yard, then they haven't ended racing, they've just pushed it onto another State. Tracks in other Southern States are filthy and grossly unregulated so what have we done? Sent healthy animals in good conditions to unhealthy and mismanaged conditions. Hurray for us. The idea of Greys not racing was a huge positive, at least that's how the supporters made it appear. They didn't tell you about track conditions. Where did people in this State think the Greys were going to go after racing was banned? Our Rescue group will take in those dogs that are available and that we can handle. How many injured animals will be left behind by breeders, trainers and owners and where will they go? Hopefully into loving, caring homes. In my opinion shame on us for sending our Greys to another State instead of leaving them here, letting them do what they enjoy to and were trained to do under watchful, caring eyes.

When Greg wanted to get a zombie picture done, I thought quick and easy...Oh NO! He wanted his brother and sister-in-law done up and he wanted it to be their wedding picture. I must say I had a lot of fun with this piece. It's 10 x 15 and mixed media of pencil, india ink, Dr. Martins dyes, grey markers, black markers and some razor blade scratching. Here's the before and after. 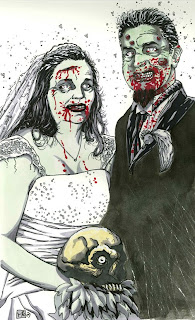 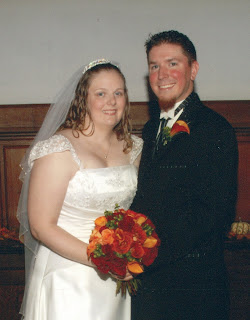 And here are a couple more zombies to get you into the Holiday spirit. 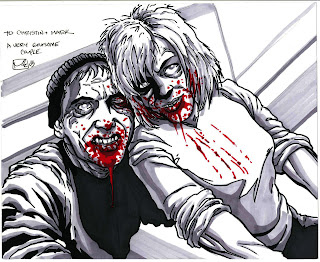 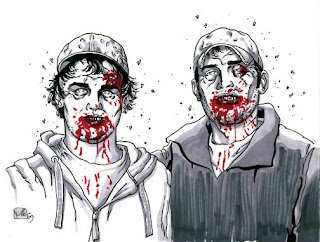 So November pretty much sucked. I got the swine flu right after Halloween so I was down for 12 days. 12 days of the worst headache, fever, cough and body aches I've ever felt. I usually don't get sick. Pretty healthy guy who tries to eat well and tries to get enough sleep. Well then it was back to work while feeling like crap and the Thanksgiving crept up on me. A few freelance gigs came through and I struggled through those. Now it;s December and I'm catching up on the friends who I met at Rock-n-Shock who wanted to be Zombiefied. Here are some of my new friends. 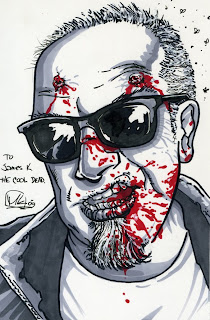 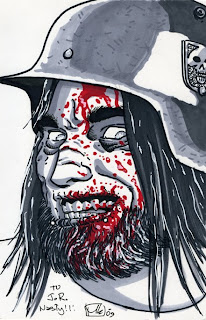 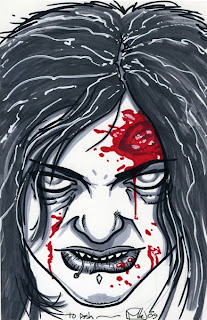 UPDATE: Here's the last one of the single zombies. Here on in it's couples and families. Mike Whelan (yup that's his name) was very patient and he was a joy to speak to. I was inspired to add a little rot green to his undead complexion. I hope you like it. 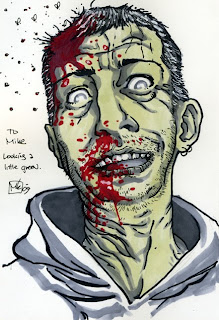