And I need a nice sign for our booth. 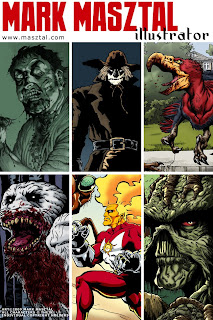 Join us at Rock-n-Shock, October 16-18. I will be there with Mike Dobbs and Marty Langford. MIke will be selling Bizarro DVD's and Marty will be selling Volume 2 of his Western Massachusetts Horror Show DVD series. I will be there selling full color prints of my latest work along with an exclusive 50th Anniversary print for the 50's horror classic Fiend Without A Face! Ask nice and I'll draw you a sketch of your favorite horror Fiend!

Rough Enough for You? 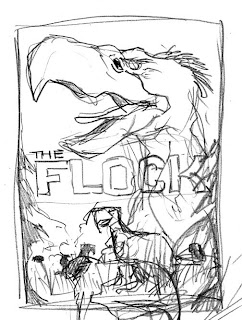 I'm back on The Flock track for at least one more time. I got a great idea for a piece so I'm going to work it up in the same style as the zombie painting and I hope it looks OK. Here's my first rough sketch. Let's meet back here in a week or so and compare the rough to the finished. Might be interesting. 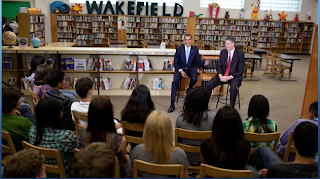 I'm ashamed in some of my local towns who, due to possible backlash from some conservative residents in their town refused to show the students in their schools President Obama's speech and Q&A with the kids of Wakefield. When was the last time a PRESIDENT OF THE UNITED STATES had a speech banned? is it his politics? Is it his race? His skin color? We're a bunch of sad human beings. The following is a letter I sent to the City of Longmeadow, MA and to G. Michale Dobbs, Editor-in-Chief at The Reminder Publications.

I just finished reading President Obama's speech on MIke Dobbs' blog. You know the editor in chief of the Reminder publications? He gave us the truth on what President Obama had to say to the kids in Wakefield and then we were treated to the Q&A that occurred between high school kids and the PRESIDENT OF THE UNITED STATES! I am so ashamed of a local town in my fair State that, due to possible backlash from some conservative parents and politicians (re: Republicans), actually banned a speech specifically addressed from the President of the United States directly to those kids. What were you afraid of? What kind of damage could this speech have done? Answer: none. Did you read the transcripts? Have you? I bet you're feeling very embarrassed now don't you? I didn't read anything political in anything that was said by either the President or the kids? Did the students ask political tainted questions? Yes they did but most of it was about Universal Health Care. The rest of it dealt with President Obama and how he was adjusting to the White House and how bad of a basketball player he is. Is that what you were worried about? Is that the kind of Town management that Longmeadow has that buckles under pressure about a speech that hasn't been heard yet? I'm ashamed for you and the rest of the City of Longmeadow. Take a good look in the mirror tomorrow morning and ask yourself, am I weak? Was it worth having my personal opinion directed by others? Do I have heart and love for my country NO matter who runs it? I'd love to hear your answers.

You need a dust jacket

I had a little spare time this morning so I put together a quick dust jacket concept. All we need now is a publisher to bite!

UPDATE: And here's the rot green version of the dust jacket.